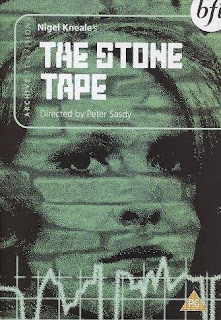 Logline: A group of audio recording engineers and scientists move their operations into Taskerlands, an abandoned Victorian mansion, in order to continue in isolation their research into a new recording medium. What they soon discover is that the crumbling stone walls of Taskerlands have their own ancient recording techniques: those that will pipe the ghosts of a thousand years through their screaming headphones.


Though the great English scriptwriter Nigel Kneale is probably best known abroad for his feature work (particularly for his stint with Hammer Films), it's no big secret that his best work was for television. The Quatermass serials (1953-1979), Beasts (1976), The Year of the Sex Olympics (1968), Murrain (1975), and The Woman in Black (1989) all bear his credit, and each is a distinct classic of British television drama. Chief among those small screen wonders, and the smartest, most perceptive piece of horror Kneale ever wrote, is The Stone Tape, scripted by Kneale and directed by Hammer regular Peter Sasdy (Hands of the Ripper (1971)). Though originally produced for inclusion in the Dead of Night series, The Stone Tape was ultimately broadcast by the BBC independent of that series banner (Dead of Night had been canceled by then) on Christmas day, 1972. (That evening so happened to be the one immediately after Lawrence Gordon Clark's A Warning to the Curious premiered on the BBC, which makes Kneale and Sasdy's film a sort of unofficial second entry in the A Ghost Story for Christmas series that year. It also makes December of 1972 a damn good year for British television horror). The film is an expertly crafted variation on a theme that Kneale had been working through in pieces like Quatermass & the Pit (1958-9; 1967) and his now-lost TV play The Road (1963): those shadowy, elusive junctures in which science and the supernatural butt heads. Kneale's particular breed of scientific horror and his theme of Ancient Superstition vs. Modern Technology can be traced back in print as far as Dracula (1897) but can be witnessed growing contemporaneously in cinema with the likes of simpler scientific-superstitious fare such as The Werewolf (1956) and The Vampire (1957) in the States. But Kneale's interest in these concepts goes far beyond the novelty inherent in melding the science fiction and horror genres: his efforts in placing the two side by side strive to demonstrate the essential similarity of modern science and ancient superstition through their shared inability to explain what goes bump in the night. 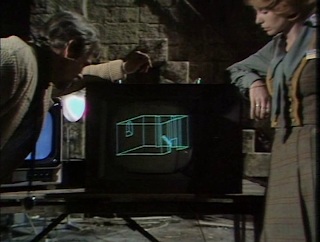 The Stone Tape is in many ways a typical ghost story. The struggle of methods between Peter (Michael Bryant) and Jill (Jane Asher) in provoking the ghost into action contrasts technological brute force with natural sensitivity to the supernatural, as these tales often do (see: The Haunting (1963), The Legend of Hell House (1973)). Furthermore, the film also features the same sort of precognition of a character's fated death and eventual ghostly afterlife as seen in tales as far apart as The Signalman (published 1866; filmed 1976) and The Innkeepers (2011). (Even then, the story doesn't fall totally into the recognized ghost story patterns: the revelation that underneath the surface haunting lurks a formless, prehistoric evil is downright Lovecraftian.) But the film's satisfying if traditional story and predictable plot progression belie the much more fascinating aesthetics that Kneale and Sasdy fuse into its production. 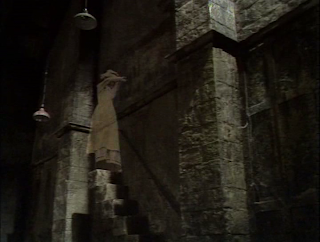 The setting is the most apparent visual signifier of the film's atypical themes. Taskerlands is a disquieting marvel of incongruous set design, all the more impressive for being constructed on a limited television production budget. The old Victorian mansion (which, as we discover, is built on even older Saxon foundations) has been partially renovated by our research team, creating sterile modern laboratories of some rooms while leaving others down the corridor in their weathered, dilapidated original states. This results in the feeling that as we travel from one room to the next we're being led back and forth between modernity and antiquity: the researchers are toiling over their inscrutable machines and printed data while next door a ghost is screaming in an unlit stone room. The building becomes a structural anachronism, a large-scale palimpsest in which the past may be written over but is never truly erased. This deliberate commingling of the old and the new extends also to the film's musical score, produced exclusively by aide of an electronic organ playing dated melodies. 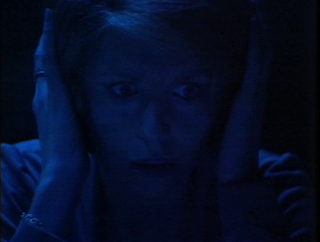 Writing of the film's deliberate aesthetics, it's also important to note the obvious: The Stone Tape is shot on video for television broadcast. Shooting a traditional ghost story with a relatively new technology produces a curious effect in the viewer when the action takes a turn for the spooky: the ghost appears at the top of a staircase as a flickering video artifact, pulsating with static as the recording progresses, and later, during the climactic events, Jill is tormented by a coterie of demonic, video-derived special effects. The fact that this visual style appears dated from our twenty-first century perspective is curiously appropriate considering the film's characters' assertions that magnetic tape is a fragile, obsolete medium. But, seeing what we've seen, can we call it obsolete, or merely the latest iteration of a recording technology that has always been with us? The film's core concept of stone (specifically, common ragstone) acting as a magnetic tape-like recording medium that can preserve and replay moments of high emotion (or unfathomable evil) is beguiling in its implications. 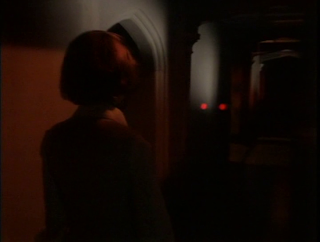 In one sense, the notion of the stone tape reveals the illusion of technological progress in understanding reality. The film argues that contrary to popular thought, technology has not allowed us to escape superstition within modernity, nor does it really grant us the ability to explain or interpret the supernatural (much of the science behind the haunting and its recording remains unclear by the film's end). The conclusions drawn from all of the research team's efforts are no more illuminating than those that could be derived from a spirit board, and the discovery that the new technology the team is seeking is several thousand years old (and obstinately untechnical) provides a sobering evaluation of the group's work (the company that employs them ultimately decides that research into the development of a new washing machine is more valuable). Moreover, the revelation of ghosts being recordings rather than sentient non-physical entities says something very profound about horror cinema itself: whether in drawing, text, or film, recordings of horror have always been with us and always will, replaying themselves endlessly to those poor or sick souls most sensitive and receptive to them. As The Stone Tape itself demonstrates with its sly employment and update of the traditional English ghost story, these recorded horrors may be written over in history with seemingly newer and fresher horrors as time progresses, but the old models of fright are always shambling, fuzzily, with a horrific lack of definition, somewhere beneath the tape's layers. 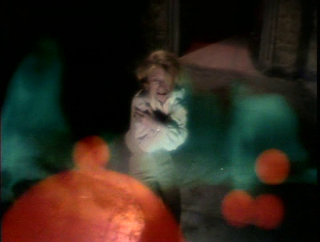 Dialogues on Amicus Horror - February - May 2014 This website is a love letter to horror cinema. Each post will parse the themes, aesthetics, and cultural assumptions of sundry artifacts of the genre in the hope of establishing the significance of these tawdry films within the larger cinematic canon. There are few feelings like the cozy terror that a horror film imparts, so join me, without fear, in my sojourn into the bizarre, ghastly, offbeat, and macabre genre offerings from around the world.